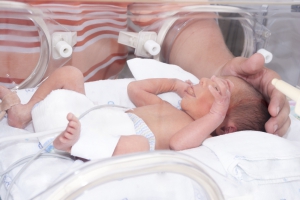 Premature baby boy became a Children’s Eye Physician’s patient shortly following his day of birth.  Born at 24 weeks gestation, he was what many people refer to as a micro preemie, one of our smallest patients. Patients born this early are (among other problems) at risk for a condition called Retinopathy of Prematurity (“ROP”).  This little patient was closely managed by our practice while he was in the Neonatal Intensive Care Unit (“NICU”) at a Denver area hospital, from the day he was born at until he was discharged about 3 months later.  His ROP disease progressed to the point of needing laser surgery.  Dr. Steele in our practice performed the laser surgery halting the progression of the disease and preserving the natural development of his eye sight.

During a follow up visit in our office keeping track of his ROP, shortly after he left the hospital, Dr. Ruth noticed what she determined to be left neglect. This 3 month old baby boy”s eyes were fixed in right gaze and he was completely ignoring the left side of his body and left side of the world. He also appeared to be floppy, due to left hemiplegia or weakness of the left side.  Although he was known to have had previous bleeding in his brain from being premature, Dr. Ruth was concerned that something new was wrong, so she sent him urgently to pediatric neurology, recommending he be re-evaluated and have an MRI of the brain.

His brain MRI revealed a brain abscess, requiring immediate surgery to save his life. He slowly recovered over time to become the healthy, happy boy that he is today.

This patient and his mom had been through so much, we are all grateful that he has now become the healthy and precocious young boy that he is supposed to be. Our practice will continue to follow his vision development, so we”ll be able to continue to watch him grow up into an active young man.

What can our practice do for these patients ensuring they and their families receive the best possible care and experience?

These patients and their families have been through A LOT from how complicated care for premature infants can be.  Parents are exhausted and have to be in the position of assembling and understanding lots of complicated information regarding their child’s health under stressful and sometimes scary circumstances.  Kindness, compassion and patience go a long way with these families who have endured a premature birth and the health problems that follow.

What is Retinopathy of Prematurity?
ROP is an eye disease commonly affecting prematurely-born babies and is regarded as the most preventable form of childhood blindness.

ROP is thought to be caused by disorganized growth of retinal blood vessels resulting in scarring and retinal detachment.  ROP can be mild and may resolve on its own, but it may lead to blindness in serious cases.  As such, all preterm babies under a specific weight and gestational age are at risk for ROP.

What Problems can ROP Cause?
Normally, maturation of the retina occurs while the baby is in-utero.  At the mom’s full term pregnancy date, the infant has normally has a fully vascularized retina.  However, in very preterm infants, the retina is not fully vascularized.  ROP occurs when the retinal vessels stop developing normally and then proceeds abnormally, growing into the vitreous instead of within the retina.  The key disease element is “fibrovascular proliferation” which is the growth of irregular new blood vessels and fibrous tissues on the surface of the retina.  This fibrous scar tissue may contract to cause retinal detachment.  The abnormal growth of vessels can slow down and then resolve spontaneously on its own, but when it progresses to cause retinal detachment vision may be lost permanently. This is why our practice watches these patients so closely and the doctors see babies in the hospital every week to identify those patients needing the intervention of treatment with retinal laser.

Multiple factors can determine whether the disease progresses, including overall health, birth weight, age of gestation, and the presence or absence of “plus disease”. Supplemental oxygen exposure is associated with ROP, however, restricting supplemental oxygen use does not necessarily reduce the rate of ROP, and may raise the risk of other hypoxia-related systemic complications or death.

Our practice has an incredible patient case management system in place to closely monitor these patients admitted at NICUs throughout the Denver metro area, ensuring these patients are tracked, evaluated at proper time intervals and cared for in the best way possible.  This patient case management system is unique in its design and very well supported both with our staff and our physicians.  We are incredibly proud of our ROP service within the community.

What is a brain abscess?